After hearing it for 40 days, the Supreme Court has reserved its judgment in the Ayodhya title case on 16 October. The final verdict is expected in November. Ayodhya issue holds special importance in the country in general and in Uttar Pradesh in particular.

To know what the opposition in the state is expecting, Anurag Sason has an in-depth conversation with veteran Samajwadi Party leader and MP of Rajya Sabha for Uttar Pradesh Kunwar Rewati Raman Singh.

Here are important excerpts from the exclusive interview: (Scroll down to watch the complete interview)

Q1) What are you expecting from Supreme Court’s decision in the Ayodhya title case?

Rewati Raman Singh: We can’t say what the judgment will be but we will accept it. However, according to my view judgment should be such that it satisfies both parties.

Q2) UP CM Yogi Adityanath has hinted that the judgment will be “a good news”. Your reaction.

Rewati Raman Singh: I don’t know what he’s trying to say but it is very strange that he’s making such kind of comments before the pronouncement of the judgment.

Q3) Samajwadi Party has a Muslim voter base. Keeping that in mind is the party expecting that the judgment should be a balanced one?

Rewati Raman Singh: I am saying that in the interest of the country the judgment should be a balanced one.

Q4) Akhil Bharatiya Akhara Parishad’s (ABAP) saints are planning to visit Mathura. They are saying that many mosques there are built on Hindu temples and Muslims should give up those too. How do you see this development?

Rewati Raman Singh: If this will happen then there will be no end to it. It will create chaos in the entire country.

Q5) For the last many years you have been continuously running a campaign–Aviral Nirmal Ganga. Tell us something about it.

Rewati Raman Singh: I personally believe that river Ganga should not be trapped in the networks of dams. The river should be allowed to flow freely. Dams have become redundant.

OPINION: Aaditya Thackeray could be game-changer in Maharashtra politics

Q6) How you see the tenure of UP CM Yogi Adityanath?

Rewati Raman Singh: It will be wrong to see the tenure of Yogi Adityanath only. Policies are decided at the Centre by Prime Minister Narendra Modi and Home Minister Amit Shah. Here, only the implementation takes place.

Q7) What is more important-construction of Ram temple, employment for youths or making the economy stronger?

Q8) Which government is more capable at the Centre-Congress or BJP?

Rewati Raman Singh: See, right now it is difficult to answer this but our party will never support BJP at the Centre.

About the author: Anurag Sason is journalist with more than 7 years of experience in mainstream journalism. He has worked in newspaper, news agency, TV and digital media. Presently, he is working as Senior Editor-News in Likee app. He tweets at @AnuragSason 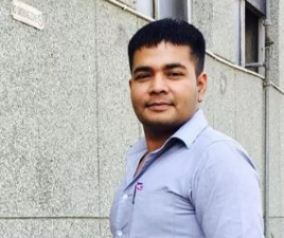 Interview is taken in the personal capacity

Anurag K Sason is an Indian journalist with experience in newspaper (print media), news agency, broadcast media, news app (short video sharing app) and digital journalism. Sason has worked as Senior News Editor in Likee app at BIGO Technology Company (MNC). He headed the entire news department/operation in India. Before joining the MNC, Sason has worked as Deputy News Editor (Digital Media/English) in India TV news channel. Earlier, he has worked in ABP news channel as Deputy Producer-News (Digital Media/English). Before that Sason has worked in Dainik Bhaskar Corp Ltd, United News of India (U.N.I)-News Agency and Northern Indian Patrika (N.I.P)-English Daily. Anurag Sason runs Monday Talk interview series. Sason has worked predominantly on the political beat. However, he has also filed many news stories in other beats too. He has taken interviews of eminent politicians like Dr Shashi Tharoor, Mr Subramanian Swamy, Mr Keshav Prasad Maurya, Mr Manish Tewari, Mr Hardik Patel, Mr Mani Shankar Aiyar, Ms Sheila Dikshit, Mr Yogendra Yadav, Mr Naveen Kumar, Mr Vijay Goel and many others. Sason has covered mammoth events like Maha Kumbha 2013, Lok Sabha elections 2014, Lok Sabha polls 2019, many state elections and Farmers' Protest (Kisan Andolan) Three years after the Kedarnath tragedy (2013), Sason traveled to Badrinath and Kedarnath in June 2016 to do two exclusive news stories. He went to both the places to see what changed since then. Sason is also a guest article writer. He loves to travel. He also loves to record his journeys and share the same via vlogs with public. Sason has also done two sting operations—one on Lajpat Nagar sex racket and another on Demonetisation related case. Even after so many years, the first one is still on top in search in Google. A native of Allahabad (Uttar Pradesh), Sason has done his MA in Journalism and Mass Communication (1st division/gold medalist) from Allahabad University. He comes from a family of government servants with him being the only person in his family as a Journalist.